Publication of My Book: “The Wonders of Ṭarīqa Kasnazāniyya Brought to India”

I am delighted to announce the publication of my new book The Wonders of Ṭarīqa Kasnazāniyya Brought to India. I edited, compiled, and wrote introductory material for the content of this book. This work is unlike any other book I have published before, and its truly unusual, as the below quotations from its introduction explain.

This book compiles a very small number of karāmas (wonders) that Allah has gifted to the Shaikhs of Ṭarīqa ʿAliyya Qādiriyya Kasnazāniyya and its present Master Sayyid Shaikh Muḥammad al-Kasnazān, the head of Ṭarīqa Kasnazāniyya. These paranormal feats were witnessed by or involved the deputy of ḥaḍrat Shaikh Muḥammad in India during his preaching tours of that country in 2011-2015. When ḥaḍrat Shaikh Muḥammad sends any of the caliphs of the Ṭarīqa to call people to Allah, he informs him that the blessings of the Shaikhs of the Ṭarīqa, which stem from the blessings of the Prophet (ṣallā Allah ʿalaihi wa sallam), will accompany him in the form of karāmas. These karāmas confirm to people the truthfulness of the preaching and that Ṭarīqa Kasnazāniyya indeed represents a spiritual link with the Prophet (ṣallā Allah ʿalaihi wa sallam).

I have compiled fifty-five karāma reports. Some of the individual reports include more than one karāma. For instance, one report documents the healing of over two hundred patients with dengue fever.[1] Furthermore, many of these karāmas include more than one paranormal feat. For example, in one karāma, a boy with dengue fever was cured by drinking water over which the caliph had read a special dhikr that ḥaḍrat Shaikh Muḥammad al-Kasnazān had given him permission to use. But the caliph was in the city of Sulaymaniyah in the north of Iraq, while the glass of water was in Kausar Nagar in the city of Bangalore in India. The distance between the two cities is over four-thousand kilometres. The third paranormal feat in this karāma is that the water started to boil as the caliph started to read the prayer.

Some karāmas are simple, although of course still paranormal, such as the healing of a patient after taking the pledge of the Ṭarīqa. Others are more sophisticated, with their details unfolding over weeks. One such example is the karāma in which the caliph saw in repeated dreams phone messages instructing him to go to a place that was unknown to him.

I have classified the karāmas in different categories according to the main aspect of paranormality in each karāma. I have put each category into a separate chapter. For instance, all karāmas that include paranormal healing have been collected in one chapter. No karāma was included in more than one chapter, even if it contains more than one paranormal aspect, to avoid repetition. To facilitate referring to any karāma specifically, I have given each a title that indicates the main paranormal feat it involves.

The narrator in all karāmas is the caliph who witnessed them. The edited text is based on the narratives I compiled from the written diaries of the caliph in India and telephone and face-to-face interviews I conducted with the caliph to clarify certain details. I have also interviewed some witnesses of the karāmas by phone. 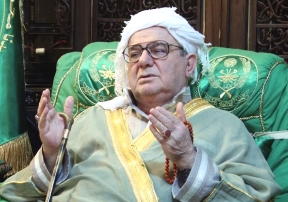 It is worth noting that the caliph communicated on a daily basis to ḥaḍrat Shaikh Muḥammad al-Kasnazān the details of his preaching tours. He would mention to the Shaikh any karāmas he witnessed. This is why there are sometimes comments by the Shaikh on some of the karāmas.

For consistency in documenting the karāmas, I have mentioned the date and location of each karāma before its account. In most cases, the day, month, and year have been listed, as these dates were taken from the caliph’s diaries. In some cases, the exact date of the karāma is unknown. This is usually due to the fact that the exact date is not written in the diaries, but at times because of the unavailability of written accounts of these karāmas. In these cases, the details came only from interviews that took place a relatively a long time after the karāmas themselves. When mentioning the location, I tried to name the city and the state. The precise locations of some karāmas could not be identified, because they took place in small villages that are not mentioned in the diaries, as they are unknown or the caliph could not remember.

The caliph has documented some of the karāmas using photos and films. At times, he took photos of those who experienced the karāmas. At others, he filmed the individuals concerned talking about what happened to them.

I have added footnotes to explain terms and concepts that some readers might be unfamiliar with. I have also compiled them in a glossary at the end of the book for easy reference.