Unsurprisingly, the news of the Russian aggression against Ukraine is dominating the news. It is also understandable that the suffering of the innocent victims and civilians of this war has been the focus of the reporting. Sadly, this focus on human loss has not always been at the centre of interest of the reporting of other wars by those very news media. More specifically, when the USA is the aggressor, the agenda of the aggressor takes centre stage and only the human side that gets the attention is the personnel of the army that started the war. Welcome to the USA history in Afghanistan, Iraq, Lybia, Syria, and, of course, Palestine. Welcome to the world in which how much human loss matters depends on the identity of the aggressor.

I was living in Baghdad during the first gulf war, 1991. I experienced firsthand the relentless bombing and was one of the millions of Iraqis that the USA, supported by client countries, chose to unleash its new military technologies on. I saw and heard “smart” and not-so-smart bombs fall on every area in my city, as was happening throughout the country. I saw the devastation they caused. I visited al-ʿAmiriyya Shelter where over 400 civilians, mainly women and their children, were literarily incinerated while in hiding from the bombing . The US knew that this was a shelter for civilians. I do not know what military honours the bombers were awarded. 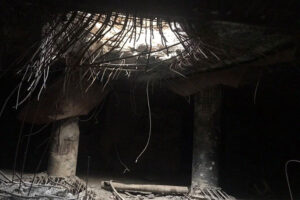 The roof al-ʿAmiriyya bunker after being bombed

At the time, I did not follow how the war on Iraq was portrayed in Western media. You could only listen to some broadcasting in Arabic by some radio stations. Not that this would have helped with the raining bombs, the lack of electricity and water, and the shortage of food. What the media of the bombing countries called those unsolicited heavenly gifts was not much of interest or help. But, of course, I was aware of the main focus of the Western media before, during, and after the war: military victory.

When the second gulf war was launched in 2003, I had been living in the UK for over a decade. This time, I did not physically live through the terrible experience of having my country turned into a devastated war zone in the blink of an eye. On the other hand, I witnessed what the media in my adopted country, which had subserviently joined the USA military action, and other Western media made of destroying my country of birth.

The invasion and occupation of Iraq, which were being marketed as “liberation”, was being reported by what I can only call “excitement” and “euphoria”. The term “shock and awe” was just too cool not to be excited about. Many, if not most, newsreaders, political analysts, and media experts were talking cutting-edge technology, dominating the enemy, lightning-fast victory, toppling a much-resented dictator, ridding the world of weapons of mass destruction, and so on. What the “shock and awe” of thousands of tons of high explosives would do to women, children, and the elderly would not come up in news bulletins and panel discussions. It is not something one would naturally think of; is it? 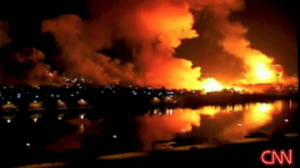 The unique shock and awe experience that the USA gifted Iraqis

When the human cost of the war was mentioned, the focus was on the losses of the invading armies, with quick reference made only now and then to the Iraqi people. After all, the US and British armies were making sacrifices for the Iraqi people. What an altruistic, almost romantic, situation. Really. The great people of Britain went out in their millions protesting against the war, and the millions of Iraqis certainly did not invite Bush and Blair to bomb their country. None of this made much of a difference. After all, those weapons of mass destruction had to be destroyed. What if they did not exist? Well, something had to be destroyed.

Two decades on from the second gulf war, we now have the same media reporting on a new invasion, but the aggressor this time is not the USA. This is a game-changer, and it is indeed a game. This time, the suffering of the Ukrainian civilians is given substantial space and airtime by media outlets. It is, of course, only right that those innocent people, their casualties and losses, and the destruction of their country be the centre of the news. But, why was this not the case in 2003? Are the Iraqis lesser human beings? The fact is that, in wars, the value of human life is decided by the identity of the power behind the aggression. The Iraqis did not matter much because the aggressor was the USA, whereas the Ukrainians do matter, as they should, because the aggressor is Russia. This is why Western media could afford to mention only in passing the many weddings and innocent human gatherings in Afghanistan that USA rockets and bombs regularly wiped out of life justified as operations targeting a terrorist or two. And by the way, there are people in Palestine other than the Israelis.

A major source of the anger of Western media and politicians is the fact that the new war is happening in Europe! “Why and how?”, those bewildered experts ask. Is this not the kind of thing that usually happens in the Middle East or an Islamic country? That is why those Russian idiots should not be allowed to wage war. Wars should be left to those who know where and against whom they should be launched. They should be left to the war experts.

PS. This article has been republished in the Kashmir Observer with permission.

We use cookies on our website to give you the most relevant experience by remembering your preferences and repeat visits. By clicking “Accept All”, you consent to the use of ALL the cookies. However, you may visit "Cookie Settings" to provide a controlled consent.
Cookie SettingsAccept All
Manage consent

This website uses cookies to improve your experience while you navigate through the website. Out of these, the cookies that are categorized as necessary are stored on your browser as they are essential for the working of basic functionalities of the website. We also use third-party cookies that help us analyze and understand how you use this website. These cookies will be stored in your browser only with your consent. You also have the option to opt-out of these cookies. But opting out of some of these cookies may affect your browsing experience.
Necessary Always Enabled
Necessary cookies are absolutely essential for the website to function properly. These cookies ensure basic functionalities and security features of the website, anonymously.
Functional
Functional cookies help to perform certain functionalities like sharing the content of the website on social media platforms, collect feedbacks, and other third-party features.
Performance
Performance cookies are used to understand and analyze the key performance indexes of the website which helps in delivering a better user experience for the visitors.
Analytics
Analytical cookies are used to understand how visitors interact with the website. These cookies help provide information on metrics the number of visitors, bounce rate, traffic source, etc.
Advertisement
Advertisement cookies are used to provide visitors with relevant ads and marketing campaigns. These cookies track visitors across websites and collect information to provide customized ads.
Others
Other uncategorized cookies are those that are being analyzed and have not been classified into a category as yet.
SAVE & ACCEPT