The English edition of my biography of our much-missed Shaikh Muhammad al-Muhammad al-Kasnazan al-Husayni has just come out. Sadly, this biography was in the process of being published when our Shaikh passed away on 4th/July/2020. Shaikh Muhammad al-Muhammad was the Master of Tariqa ‘Aliyya Qadiriyya Kasnazaniyya, one of the largest Sufi Tariqas with followers throughout the world. Tariqa Kasnazaniyya, as the name is usually abbreviated, traces its roots to the source of all Sufi ways, the Prophet Muhammad (PBUH). Our Shaikh is a descendant of the Prophet (PBUH) from both parental sides. Sufism, as our late Shaikh used to say, represents the spiritual side of Islam. 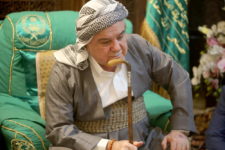 With hearts full of submission to and acceptance of Allah’s decree, and with extreme sadness and great sorrow mixed with complete content and surrender to Allah’s indisputable will, Ṭarīqa ʿAlīyya Qādiriyya Kasnazāniyya announces the passing of its Master Shaikh Muḥammad al-Muḥammad al-Kasnazān al-Ḥusaynī may Allah sanctify his secrets, benefit us with his knowledge and favours, and confer on us his blessing and light. Allah Almighty has taken him to His presence after midnight on Saturday 4th/July/2020 CE, 13th/Dhū al-Qiʿda/1441 Hijri, 13th/al-Bayʿa/1495 Muḥammadī, in the USA where he was receiving medical treatment.

I am delighted to announce the publication of the second edition of my biography of Shaikh Muhammad al-Muhammad al-Kasnazan al-Husseini, the Master of the Sufi order Tariqa 'Aliyya Qadiriyya Kasnazaniyya. This is an improved and expanded edition of the first edition, which came out in October 2018.

We all each now and then meet and hear about people who perform the daily obligatory prayers for a period of time then abandon it, then start again, just to stop praying after a while, and so on. The same happens with fasting. Some Muslims who do not observe the obligatory prayers still observe the fasting of Ramadan, and some of them would also observe the prayer during the holy month. But once the fasting month is over, the daily prayers immediately or shortly afterwards are abandoned.

There seems to be growing acceptance that the length of the fasting day of Ramadan in high latitude places is too long for many if not most people to observe. Jurist have already addressed this issue in light of the fact that it is subject to “ijtihād” or “personal reasoning “. One proposed approach is to use the length of the fasting day in Mecca or Medina in in places where the time between dawn and sunset would be too long to fast.

I am delighted to announce that my book Jesus the Muslim Prophet: History Speaks of a Human Messiah Not a Divine is now permanently available online for free and easy access. The book is a detailed comparative study of the nature of Jesus according to the Qur'an and the New Testament and other Christian sources.

Celebrating the birth of the Prophet Muhammad has been a controversial issue for some Muslim who argue that it is a bad innovation. Yet honouring the Prophet’s birthday is a consequence of the love the Muslim has for him. This love, in turn, is necessary for one’s practice of Islam and drawing near to Allah.

The newly discovered “Birmingham muṣḥaf” is among the earliest, if not the earliest, manuscripts of the Qur’an in existence. The text on these two leaves is identical to the text of the muṣḥaf we have today. Yet this has not stopped some from trying to turn the significance of this stunning discovery on its head, claiming that it questions rather than supports the preservation of the Qur’anic text!

I am delighted to announce the publication of my new book The Wonders of Ṭarīqa Kasnazāniyya Brought to India. I edited, compiled, and wrote introductory material for the content of this book. This unusual work contains fifty-five reports of wonders that were witnessed by or involved the deputy of ḥaḍrat Shaikh Muḥammad al-Kasnazān in India during his preaching tours of that country in 2011-2015.

Fanaticism and extremism should be fought in every way possible. Combating them with doctrinal discourse is necessary and useful. An even clearer and stronger argument is that such groups lack mercy, which Islam has made it a fundamental pillar of the Muslim character. Yet the argument of mercy is highly underused.